I recently reread a short essay by Maureen Watson (2015) titled: Treasures in Darkness: Loving the Questions.  In the essay, Watson speaks about what it feels like to live in the darkness. A year ago I was in a dark place, and although I had good reason to be there, it was torture. Parker Palmer’s metaphor of winter also speaks to where I was at the time. It was cold and it felt like the wind was blowing hard as I stood on a flat plain all alone in the dark of night.

My choice to phrase the above paragraph in the manner that I did was intentional, and does mean that I’m no longer solely in that place. I don’t want it to be heard that I’ve somehow done a 180, but I have made progress. And I can see the progress. All of this I share because recently I’ve been thinking about how I once had a counselor who asked me if it was okay to revisit experiences that I thought I had worked through.  I was in a very stubborn place and was sharing with her that I refused to consider the past…I just wanted to be fixed even though I knew that she wasn’t going to tell me how I could be fixed. She pointed out that despite working through something in the past, I had since had more experiences that might lead me to see my past experiences differently, and she asked me if I thought that was possible.  Her question stayed with me, and is often something I still consider.

All of these thoughts combined with a passage I was recently reminded of in my Introduction to College Student Personnel course:

“Personnel workers see the person–at whatever age–not as a single moment independent of the past and the future, but as a transition point in a stream of experience that goes back to infancy and will continue on into the future” (Lloyd-Jones, 1954).

And the combination of these thoughts with current events such as the shooting of Keith Scott, the homelessness of the Syrian Refugees, the Native American tribal land protest, and the weekly interactions I have with first generation students place my mind in a spot where I can’t imagine how we could ever feel settled in higher education.  Yet, feeling settled is often what I believe we desire.  I know that I’ve desperately wanted to feel the security of having settled over the past year and a half–the safety that I can count on at least one piece of knowledge and believe it to be true.

Wouldn’t it be nice if we could feel comfort in spite of today’s current events instead of only frustration and darkness?

It is in these moments of desiring comfort and stability, however, that I can see that I’ve managed to get through the dark place I was in and find a bit more light by going one step at a time.  And this time, I deeply value the light rather than taking it for granted.  In other words, now that I am able to see how far I have come, I find that I want to make sure that I am always a bit uncomfortable, and in many ways I hope that we all are a bit uncomfortable. For it is in that spot, that I believe we discover the most about ourselves. 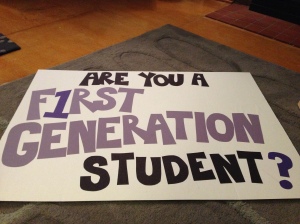 A few students within the College Student Personnel program at Western Illinois University and I have been meeting over the past few weeks to discuss (and put in motion) the creation of a student organization for First Generation students. This next week, on September 25, we will host our first interest meeting (Sept. 25, 5-6 p.m., Fox Room, University Union). How am I feeling about all of it?

I’m nervous and excited at the same time.

The idea for a student organization came to me when my student affairs background and research interest collided in my mind.

And the idea was affirmed the other night when I attended a speaker, President and CEO of the NIC, Pete Smithhisler, sponsored by the fraternity and sorority life community at WIU. As I sat there listening to Pete speak about courage, I could not help but consider the founders of my own organization, Pi Beta Phi. What it took for them to first decide to go to college, and then to start I.C. Sorosis. I can see how the structure the Pi Beta Phi founders modeled is the same structure the students and I are emulating as we work to get the first gen. group up and running. I also think the creation of both groups is somewhat similar…or at least comparable:

A group of students with similar identities coming together to form what in many ways is a family as they proceed through college together.

These similarities give me hope, as I reflect on Pete’s speech and how much good fraternities and sororities have made in the world. We want the student organization to do good. Yet, how it will is still to be determined. We want the students to contribute to the creation of the group around the following values:

Still though, even with the identification of values, how they are enacted is left to be determined. We know we don’t want it to be like a class, and aren’t trying to become a bridge program. Such initiatives are worthwhile, but different than the aim of a student organization. We do hope to have first generation faculty and staff involved in some way, but that way is still to be figured out. So much is still left to be decided, but that’s a part of what makes me nervous and excited. Here’s hoping for a nice turn out next Thursday night…all are invited. 🙂

I recently finished reading two books about First Generation college students (The First Generation Student Experience: Implications for Campus Practice, and Strategies for Improving Persistence and Success by Jeff Davis and First-Generation College Students: Understanding and Improving the Experience from Recruitment to Commencement by Lee Ward, Michael Siegel, and Zebulun Davenport). Each book was a fairly quick read, and both have been on my mind since completing them.

What was quite clear to me from both books (Davis’s book contained more personal narratives, and Ward et al.’s book discussed more institutional strategy) is that what is known about first generation students is that they are hard workers.

1. Focusing on creating learning environments in which students are shared what they will learn, how it contributes to the mission of the institution, and then have experiences aiming to reach those learning outcomes helps first generation students understand and get on board with the experiences they are participating in. (Incidentally, creating such environments assists non-first generation students too.)